Nukketeatteri-ANNOS (Portion of Puppetry Theatre) is a touring theatre group from Finland with two principal members: clown-puppeteers Oswald Basten and Anna Louhelainen. Both have graduated from the puppet theatre department of Turku Arts Academy (Finland) in 2005. Later they have studied clowning with different teachers: with Eric de Bont (Spain) in 2012 and with Sue Morrison (Canada) in 2017.

The plays of the theatre group combine clowning and puppetry. Different puppet techniques are used, but the speciality of the company are table-puppets with moving eyes and opening mouths: technique inspired by the japanese Bunraku-puppets. Over the years Nukketeatteri-ANNOS has collaborated in many projects with musician Olli Attila, who has composed scores for the performances.

All the plays of Nukketeatteri-ANNOS are almost without words – the story is told through movement and music. So, there is no language barrier! The shows are suitable for the whole family (suggested age for the children is 3 years and up). Below you can find descriptions of the plays that are available. So, how about a small but tasty ”portion of puppetry”?

We are happy to offer you the clown and puppet shows described below in English. Please, inquire for more information.

"Co-co-cold! In the beginning, there was no fire on earth and the world was a cold place. Only Weasel had fire, but he lived on a high mountain and guarded it from the other animals. That's when a small but brave Rabbit decided to trick Weasel and bring fire back to earth for everyone."

This warm-hearted performance is based on the First Nations folk tale "How Rabbit stole the Fire". The story highlights the importance of doing good for others - the warmth of fire is meant for everyone! The show´s costumes create different atmospheres on stage. Storytelling, clowning, singing and dancing entice children into imaginative play. "COLD PAWS, WARM HEART" is a Finnish-American collaboration: performed by Anna Louhelainen (FI) with Moshe Cohen (USA) and Oswald Basten (FI) as directors. 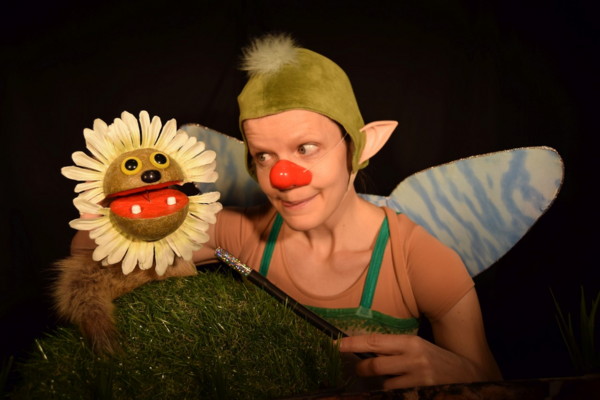 The story tells about a silly clown fairy whose greatest dream is creating flowers. But what happens when she forgets all her spells and even breaks the magic wand? Unexpected mishaps and blunders follow, but the biggest surprise is reserved for the end. Little clown fairy learns there is magic in the world that can happen without any spells! The enchantment of happy coincidences, the beauty of trying your very best and never giving up...

”GIGGLES, THE CLOWN FAIRY” (in Finnish: ”HA, HA, HALTIJA!”) combines clowning, puppetry and simple magic tricks. The highlight of the show is a dancing flower character created by means of mask theatre.

Aerial master Osvaldo has purchased a dynamic DIY flying machine by mail order. He is planning to build this extraordinary apparatus in front of the very eyes of the public – with the help of his friend, Augusto. But the strange parts they find in the mail box are not quite what they expected. Have they been... swindled? After many bloopers and blunders Osvaldo and Augusto finally understand that only collaboration and helping others give wings to one´s dreams, making them fly!

A warmheartedly silly clown story about technological challenges and the power of human connection. 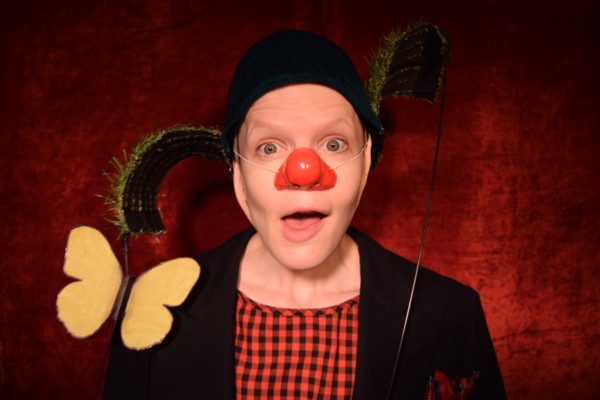 The sun is shining, grass is green – and a tiny penguin is splashing in a giant tea cup. Wellcome to a clown´s tea party – it´s full of surprises! Seasons change at tremendous speed. Spring - gone! Summer - gone! Autumn - gone! Winter – gone! Whatever the season, a sip of tea with your best penguin friend is always a pleasure!

A story about seizing the moment (and a cup of tea!) in a big and complicated world. 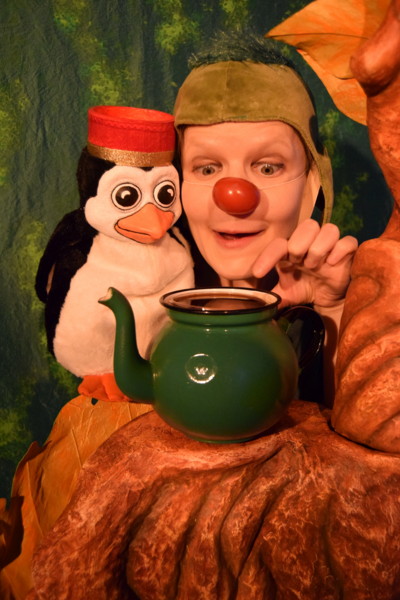